YOUR COMMENT will help put an end to this once and for all!!

TIME’S UP!  ENOUGH is ENOUGH!

Here’s everything you need – feel free to comment more than once with different ideas. February 16, 2022 Deadline for Comments

Find Suggested Comment Topics Here – choose the points you wish to express, personalize it with your own wording and additions.

Find Directions for Filing FERC Comment Here  – There are a couple steps to the process, if you run into difficulty call FERC’s Office of Public Participation 202-502-6595. If you have commented previously skip the registration step and instead go to step 4 and log in.

National Fuel has applied AGAIN! to FERC, requesting 3 more years, until December 2024, to start and complete the Northern Access 2016 Pipeline Project. It appears they have not even notified those most impacted, the landowners, along the 97 mile route of the pipeline of this request and comment period.

DENIAL OF THE TIME EXTENSION WOULD MEAN THE END OF THIS PIPELINE! ENOUGH IS ENOUGH!

FERC Notice of Request for Time Extension and Comment Period 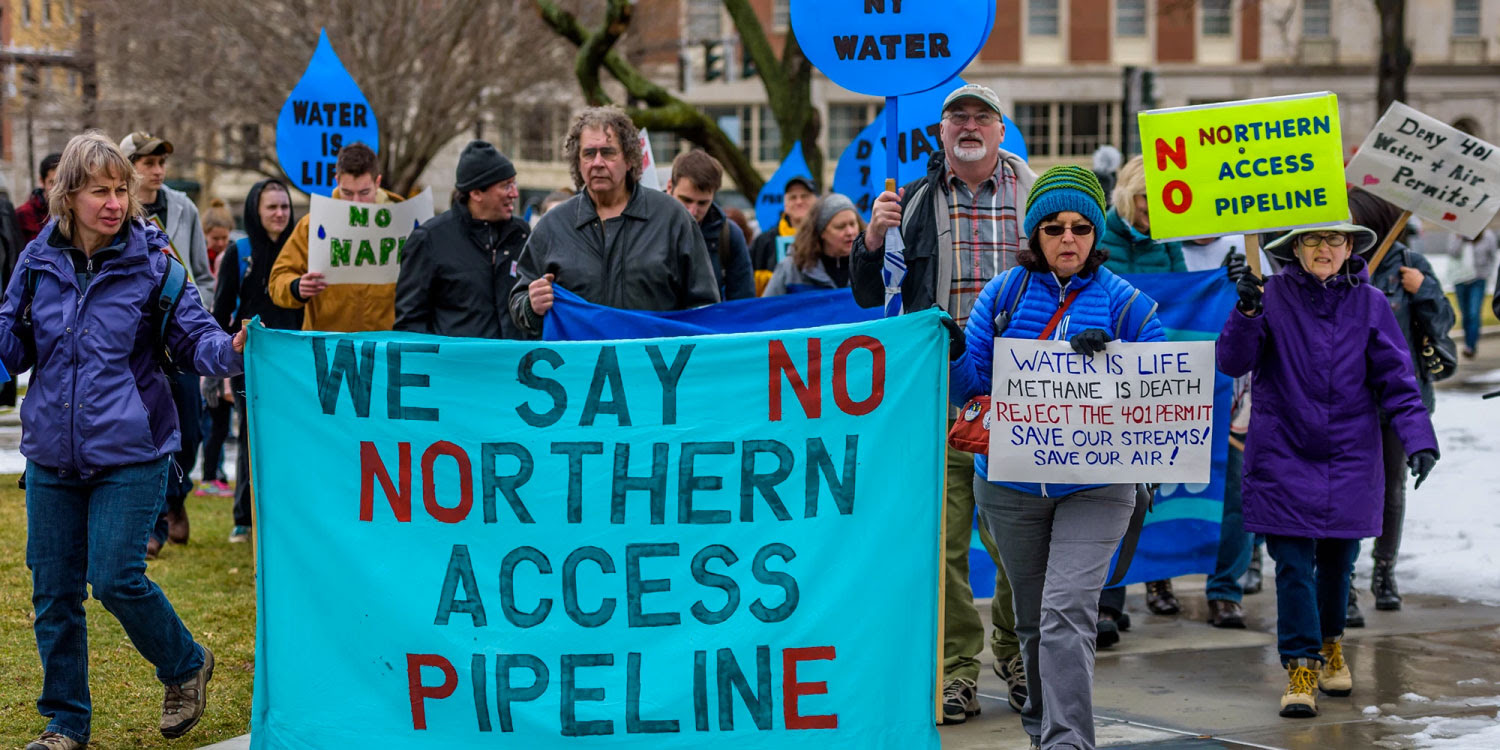 NYS Department of Environmental Conservation said NO to NAPL, yet National Fuel Gas Co. refuses to take NO for an answer.

Despite NYSDEC’s denial of the Northern Access Pipeline Project, National Fuel continues attempts to move ahead. As they PERSIST, NoNAPL Coalition will RESIST from the fracking fields in PA and northward through Western NY. We teamed up with Sane Energy and 350.org as part of their statewide Sit-Stand-Sing, the many roles of non-violent direct action tour. We had an amazing day of training and community building, now let’s come together to plan next actions!
Update August 2020:
On June 25th, 2020, New York Court of Appeals decided in favor of National Fuel in Theresa Schueckler’s eminent domain case. This was sad news for Theresa who along with her deceased husband Joe, fought a long hard battle to protect the water and land that they spent over 50 years caring for and lovingly planting 1000’s of trees. These fights are SO stacked against landowners. The U.S. Supreme Court would be the next step. If anyone knows of the resources and/or a lawyer to take that route, let us know. We owe much gratitude to Theresa and Joe for standing up to National Fuel through years of threat to their home.
Additional bad news came for the Town of Pendleton that has been battling for years to keep National Fuel’s 22,214 HP compressor station out of their community. On July 14, 2020, U.S. District Court of WNY decided against the Town’s ability to block the compressor through zoning laws that were never intended to allow a toxic spewing compressor station.
All this means that National Fuel is continuing to clear the way should they choose to begin construction despite low gas prices and no need for the gas. This could happen despite the fact that NYSDEC’s defense of denial of the 401 Water Quality Certification is continuing its way through the court system.

UPDATE: NYSDEC did the right thing on April 7th 2017, when they denied the 401 Water Certification for the project. Now the sad news is, that in August 2018 the Federal Energy Regulatory Commission (FERC) overturned NYSDEC’s decision by falsely claiming that NYSDEC did not act in time with their denial. NYSDEC and the Sierra Club are fighting this FERC ruling…here we go again! In the meantime, National Fuel stands ready to plow ahead with this project ignoring NYSDEC’s carefully researched and considered environmental concerns especially regarding the 192 stream crossings. National Fuel is also now moving ahead against the will of the people who do not want to give up rights to their land by pursuing eminent domain cases against landowners. One couple who won their case on appeal, is now being challenged and taken to court by National Fuel for the THIRD time. National Fuel has also recently filed with FERC, requesting a three year extension on the project with a projected completion date in 2022.

So…we need YOU to stand with us as we continue this fight!

Thank you all for Joining us to Rally at National Fuel Headquarters on a cold winter day, January 12, 2019!

We gathered to let National Fuel know that we have not gone away, we are in fact stronger than ever and now stretching from Niagara County to those impacted by fracking in PA. Thanks to Defend Ohi:yo’ for organizing!

Check out the news coverage:

Thanks to all who joined our March 27th 2017 Albany Rally! Our Voices were Heard!

National Fuel is proposing to build 97 miles of pipeline to move fracked gas from the drilling fields of PA through our beloved Southern Tier crossing 180 streams, 270 wetlands and 7 ponds along the way. The proposed project includes a strongly opposed  22,214 HP compressor station in Pendleton, a 5,350 HP expansion of the Porterville compressor station, interconnection with Tennessee Gas Pipeline in the Town of Wales and a dehydration station in Wheatfield to prepare the gas for export under the Niagara River and into Canada. The dehydration facility would sit near railroad tracks surrounded by densely populated neighborhoods half a mile from the Niagara River and about a mile from Love Canal that is reported to be leaking again into residents homes.

Follow the Financing of the Pipeline:  view the Banking on National Fuel Map created by Rob Galbraith of the Public Accountability Initiative. Be sure to advance through the graphics to see the local banks involved in financing the Northern Access.

National Fuel Fracking for Dollars by Rob Galbraith Published in The Public Jan 4, 2017

Joseph Schueckler of Cuba overlooks the trees and hills at a 200-acre property he and friends first purchased in 1963 through which National Fuel Gas Corp. seeks an easement by eminent domain to construct its proposed Northern Access Pipeline. (T.J. Pignataro/Buffalo News)

Seneca Nation Speaks Out Against Pipeline

A viral video of a National Fuel pipeline leak in Franklinville, NY is incredible but National Fuel’s response is even worse. They knew about the leak for over a year but did nothing about it because it is in a rural area and they have bigger leaks to fix and getting service to new customers is a higher priority. A company that can’t take care of the leaks it has should not be trusted to build a new 97 mile pipeline. Read the Article in the Olean Times Herald.Thank you to the responsible hunter who posted the leak on youtube and got enough attention that National Fuel has reportedly fixed the leak to stop the phone calls – not because they decided to be responsible. (In the video he does incorrectly attribute the Dakota Access to National Fuel – that is Energy Transfer Partners)

Olean Times Herald: National Fuel Gas says gas leak shown in YouTube video repaired The leak was along a natural gas distribution line through part of Boyce Hill State Forest off Bryant Hill and Phillips roads in the town of Franklinville. “It’s out in the middle of nowhere,” said Merkel (National Fuel’s spokeswoman) of the leaks.

Lia Oprea of WECAP (see Facebook page https://www.facebook.com/wecap/?fref=ts) has been busy getting the word out about the dangers this pipeline would pose to our water supplies.
GREAT WORK LIA!! THANK YOU!!
Making our communities aware is probably the most effective thing we can do.

Email niagarasierra@gmail.com with any questions

For a map of the pipeline go HERE (if enlarged in your browser it will show more detail including roadways).

More information on the proposed project can be found at National Fuel.

This proposed Northern Access 2016 is part of a new report titled, A Bridge Too Far: How Appalachian Basin Gas Pipeline Expansion Will Undermine U.S. Climate Goals.  This report documents the climate impacts of the massive proposed overbuild of natural gas pipelines. Reuters has done a story on the report:  New gas pipelines would make U.S. miss climate target .

Highlights of the report include: