This page is being updated…under construction…

The Sierra Club joined with PUSH Buffalo and many others as part of  NY Renews, a coalition of over 180 environmental, justice, faith, labor, and community groups, in years long advocacy that has led to:

New York State’s 2019 passage of the strongest climate legislation in the country,

“With the passage of the Climate Leadership and Community Protection Act (CLCPA), New York has enacted the most aggressive climate change legislation in the nation. Ignoring climate change leaves our children to deal with its catastrophic consequences. As Washington turns a blind eye and rolls back decades of environmental protections, New York turns to a future of net zero emissions.” Governor Cuomo.

The Climate Leadership and Community Protection Act establishes aggressive mandates to move NY’s economy to clean renewable energy, reducing green house gas emissions and thereby improving public health, environment and economy. It also sets accountability for doing so equitably across all sectors of the economy, prioritizing climate and environmental justice and the creation of good, sustainable jobs across the state.

In September 2019, the Sierra Club released a report calling for Governor Cuomo to set a state-wide target to reduce on-road transportation emissions 55% by 2035, in order to meet New York’s long-term climate goals. The report finds that, although New York’s transportation sector is not presently on track to meet its climate goals, the 55% by 2035 target would put the state on course, while saving New Yorkers billions of dollars in public health, environmental and transportation fuel costs. Read more here. 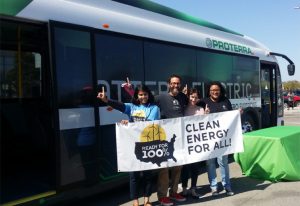 Here is a quick and easy way you can do your part and sign up for renewable energy!